“Drifting, awash in seas of darkness, forlorn souls lost amidst the great void. The brief flame of existence, lit by nature’s wonder, strays across the galaxy without purpose or direction. A brief flicker of emotion and sensation, a split second we call ‘life’, which soon fades as the shadow of inevitability commits its ceaseless genocide upon hopes and dreams. This is humanity. And this is all we shall ever be.


As wise as the Old Words are, one must ask: is it truly so? When our mortal eyes look to this ominous ‘great void’, what do we see if not the countless billions of stars that burn bright in the dark? What do we truly perceive, if it is not those great balls of gas and fusion, which bring life and warmth to all corners of the galaxy? And so one must ask: what are these bright hopes and burning passions in our hearts, if not a reflection of the universe itself?

Do not despair, Brothers and Sisters, for as cruel and heartless as the universe may seem at times, we are still the light amidst the darkness. Like the hydrogen giants that burn in the void, the fires of existence fuel us all! Remember now and always: once set alight, our will is as undeniable as the Loving Stars themselves, and ours is a dream which shall never die!”

Now let us go forth, Brothers and Sisters, glowing bright in this time of darkens and doubt! Let us go forth, together, and sow the seeds of the Garden of Plenty! For a better future! For all eternity! For all mankind!”

Reflecting the player character (Vine) embracing belief in humanity’s greatness, the Edenite archetype is a hopeful outlook on life and the world of Scaffold 22. No feat is too impossible, no problem insurmountable, just so long as one is firm in conviction and unwavering in belief that the human race will conquer all obstacles – together, as a species. 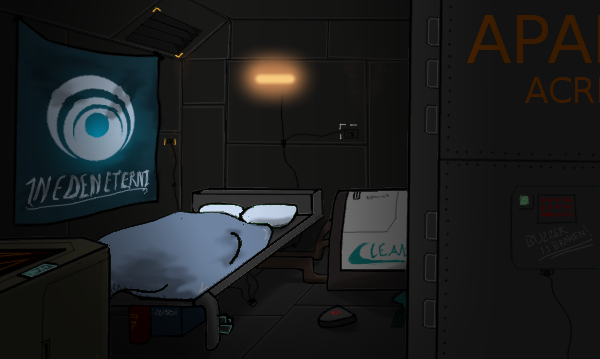 “Eden. Loving Stars. Whoever the fuck is listening…”

– Vine, upon first praying at the Chapel

The Edenite, by virtue of their budding belief, tends to look favorably upon the Church of Eden and will often frequent places of prayer. They are however not bound by this conviction and can interact with and support any faction they are on friendly terms with, provided that faction is not opposed to theological concepts. 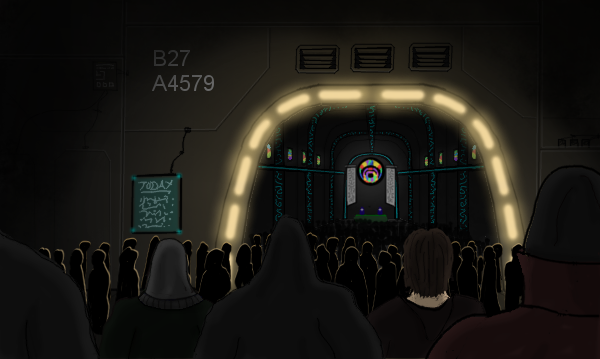 Chapel of Eden
(Prayer Hall)
The brutality of life in the Downs is not lost upon the Edenite however, lending their belief an air of constant conflict. On one hand they long to embrace the hopeful idealism drives them to place themselves in harm’s way so others might live in safety. On the other hand, they’re painfully aware of humanity’s capacity for indifference and cruelty, bitter trains of thought that taint their notion of ‘Justice’ and foster disdain for disbelievers, heretics, and those the Edenite deems ‘impure’. 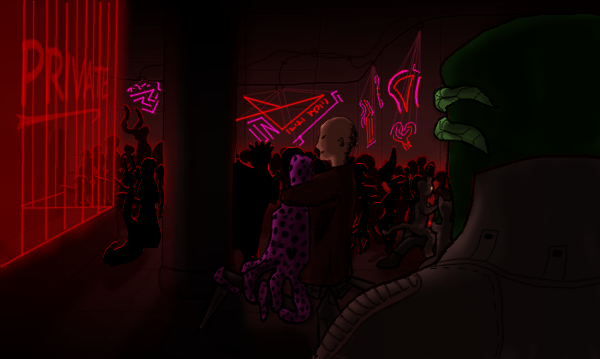 A cesspit of Impurity
(Or not?)
Thus, while generally a hopeful archetype with a positive attitude towards life, the Edenite is burdened by this bitter undercurrent, one that threatens to subvert their convictions. Gameplay wise this is represented in the Edentie’s InZtinct sheet, which groups available skills into three loose categories:

Dedicated to the pursuit of Justice, the Paladin is a skilled warrior, unwavering in defense and more that prepared to ‘cleanse’ anyone – and anything – they deem impure, ideally in the sacred flame of a plasma caster.

Armed with expansive knowledge of Church Law, the Inquisitor knows how to best use their official sanction and charismatic personality to bring those most deserving of punishment to justice – albeit not always via official channels.

Having wholeheartedly embraced the Loving Stars and the notion of Eden, the Believer overcomes their personal failings, doubts, and impure thoughts with sheer conviction, granting them almost superhuman strength and endurance.

Whether they ultimately become a paragon of human virtue or a spiteful zealot consumed by personal crusades, the Edenite is nothing if not a true believer on a mission from Eden. Their faith – be it strict adherence to the Church’s theology or a personal form thereof – remains at the core of their identity at all times.

After all, they have finally found that purpose they once lacked, and what greater cause could there be in a mortal’s life than contributing to the Garden of Plenty so that future generations might prosper in the eternal light of the Loving Stars? 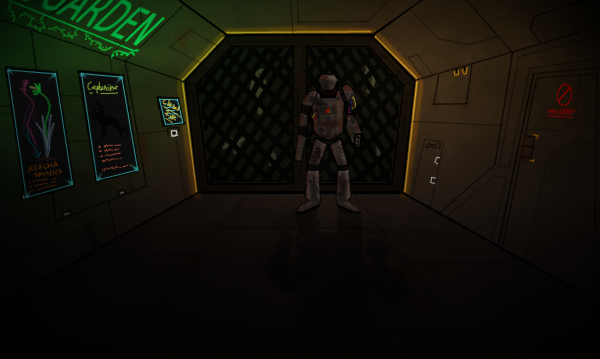 A Garden
(not one of plenty)
Beta 0.6 Released

Conventionally, a new release would be announced with a dedicated news post. But let’s be frank here: Beta 0.6 is more of the same, just better. Major bugs have been fixed, gameplay concepts refined, and new features added where appropriate. It’s a big step forwards and we’re getting close to where we want to be, no doubt about it.

Thing is, there’s only so much you can say about what’s been fixed in the latest release before it gets boring and repetitive. So, until we have a list of features worth talking about in greater detail, we’ll tack release announcements on the end of content presentations. That way there’s always something interesting to read here and you still know when updates are released.

Anyways, if you’re intrigued, why not give Scaffold 22 a try?